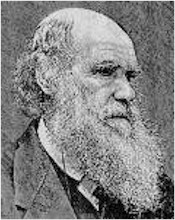 Darwin is known by most humans as the Father of the Theory of Evolution, but he is even more infamous among the Viaatant society as being the Father of the Theory of Privileged Knowledge Dissipation. He caused a paradigm shift in Viaatant strategy and procedure by scientifically proving that some of the information that they held in their neural network might be used more wisely and to their advantage if they were to give small, confusingly scattered table scraps of it to the humans. Previous issues on this topic were invariably settled by continued secrecy of their intelligence. Darwin’s novel research using human experimentation convinced the Viaatants that giving human society strategically selected bits of information was far more efficient (and more fun) than giving them none at all. His big breakthrough was when he was given the permission to test his research on human Biological Science. His Theory of Evolution was released to the scientific community and they (we) literally ate it up. The humans have been extrapolating and masticating on his theory for over a century now, only to come the conclusion that Homo sapiens is Master of their Universe. The gist of his Knowledge Dissipation Theory is -- to give humans something new and radical, watch them fight over it for a while, then watch them take it to the extreme, all the while getting nowhere with it and wasting an infinite amount of collective time and energy. As you can see, his experiment worked perfectly. Humans now believe (and have conclusively shown) that armadillos are extremely stupid, primitive creatures with very few rational thought processes. Meanwhile, in reality they are controlling our lives and brains. Those malicious, plotting Viaatants have been feeding us crap ever since. Beware!