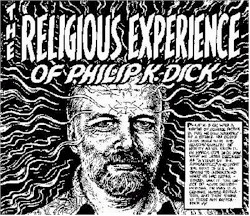 Philip K. Dick was a science-fiction writer who was killed by the Viaatants in the mid-1980’s. It is unknown as to how he originally became affiliated with the Viaatants, but one thing is for sure - He was killed by them for subliminally trying to tell the world about their presence. You may not know much about Mr. Dick because many of his works of genius are unknown. A few of his stories are more well known as they were made into sci-fi movies such as “Blade Runner”, “Total Recall”, & “Screamers”. His secret plan to uncover the Viaatant race was simple: to write stories that would subliminally deposit paranoia and distrust into the minds of the readers. For whatever reason, he disagreed with the V’s strategy of disguise and secrecy and decided to take it upon himself to send to his human readers a fictional glimpse of Viaatant reality. A little tip for all of you disbelievers out there: Go to a book store, pick up one of his books, and then come back to Viaat-Net. Our theories will all sound a lot more probable once you realize what “They” are capable of.