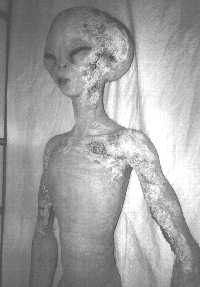 Bobo-cletus was from the planet Havascklaclia, Andromeda galaxy. His exact birthdate is unknown. I won’t get too much into the Havascklaclian beings, but it (Bobo-cletus - a member of a hermaphroditic species) is famous on Terra for unknowingly planting alien and extra-terrestrial paranoia into the human mind. You see, Bobo-cletus came to Earth for reasons unknown back in an area known by many humans as “Roswell”. Yes, you guessed it (I am sure the above picture of him clued you right in). He is the original "Roswell Alien” that millions of Earthlings know and love today. This shocking information came from Spanky, one of the most respected and helpful Viaatant armadillos we have ever interrogated. (Click here to learn more about Spanky and his current dilemma) When he arrived, he immediately tapped into the Viaatant intelli-Net because he sensed it right away. He apparently thought (and was purposely misguided by the V’s) that they were the original human culture. What transgressed between the two alien races is currently under research. Some Humans claim that Bobocletus was captured, killed, and dissected in a secret government lab. Spanky seems to think otherwise, explaining that Bobocletus simply exchanged information with the Viaatants and, thinking that he had learned and seen everything in that one instant of Vognition, went on his merry way untouched and unseen by the humans. Join the INFO-BASE to stay informed of discoveries on this most controversial topic, as more interrogations are carried out.